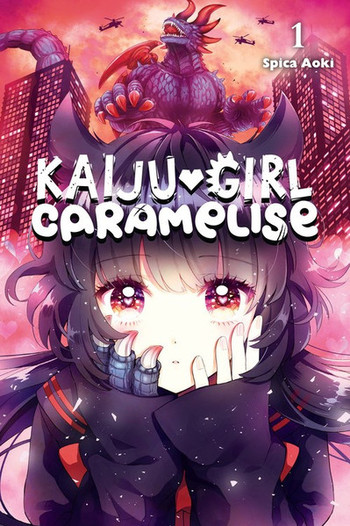 "Love is nothing but terror."
Sorry, Minami-kun. It really doesn't look like I can have a normal romance. But... I do want to treasure it. This emotion you've given me, that is. I just hope I don't stomp it into the ground myself —
Advertisement:

Kaiju Girl Caramelise (乙女怪獣キャラメリゼ, Otome Kaijū Kyaramerize) is a manga series by Spica Aoki that started being serialized in February 2018 in Monthly Comic Alive, with collected volumes printed by Kadokawa Shoten starting in June 2018 and an English translation published by Yen Press starting in June 2019. Although Monthly Comic Alive is a seinen publication, the author has called Caramelise a Shoujo series.

Ever since she was little, 16-year-old high school student Kuroe Akaishi has suffered from a strange condition that manifests during times of heightened emotion: parts of her body deform in freakish ways ranging from getting a scaly reptilian hand to growing spikes along her spine. Shunned by her classmates over the years as a result and following the advice of her mother Rinko, she shut herself off from friendship and fun in the hopes of maintaining a semblance of normalcy. She has managed to keep her condition a secret while attending Ginjuuji High School, but her bizarre and antisocial behavior has resulted in her being derisively known as "Psycho-tan" among the other students.

One day, while spending her lunch break alone, Kuroe's popular classmate Arata Minami strikes up a conversation with her. He convinces her to go with him to a fancy invitation-only restaurant on a kinda-sorta date, where they manage to bond against the odds — and with Kuroe trying to keep her expectations and emotions in check to avoid an embarrassing incident. But when Arata decides to hold her hand while walking her back home that night (in direct response to hearing two mean girls in their class calling her ugly), Kuroe can't contain herself anymore; she runs off in a love-stricken panic and accidentally falls into the Harumi River, where she suddenly turns into a skyscraper-sized Kaiju.

Upon turning back to normal the following morning, Kuroe sees numerous news reports about her giant monster form, now dubbed "Harugon" by the public. No one is aware of the creature's true identity except her and her mother, who is suspiciously unsurprised by her daughter's most recent and most drastic transformation. Kuroe must now balance regular school and family life, her now slowly-growing group of eccentric friends, and her blossoming feelings for Minami with her new need to keep the love monster inside her in check.

Not to be confused with Kaiju Girls.