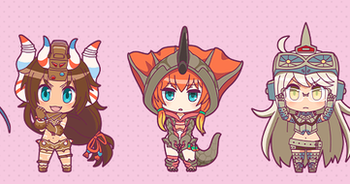 Kaiju Girls is a Fall 2016 Web Anime series by Tsuburaya Productions, better known for their Ultra Series. In fact the show is all about cute girl versions of the most famous Giant Monsters from that franchise. In the show, all the monsters have already been defeated, but their spirits have been reborn as human girls, with the capacity to transform into super-hero like forms by using devices called "Soulrizers". Hilarity Ensues.

Basically a Gag Series, the show is made up of short (approx. 5 minutes long) episodes, focusing on the three main characters, who have just been recruited by an organization called GIRLS, and their school antic-like trials. As to be expected from such a series, there's a load of references to past Ultra series shows, subtle or otherwise.

The web anime was created as part of the Ultra Monsters Anthropomorphic Project by Tsuburaya and, like one of the manga in the project (Galaxy Days), it uses ASCII Media Works' designs rather than POP or PLEX's designs for the characters. A prequel novel series, recently titled Kaiju Girls: The Beginning Stories for the single-volume release, was published on Dengeki G magazine, telling the stories of different kaiju girls in the days prior to the web anime's story and is Darker and Edgier than the anime short itself.

The second season starts airing on Tokyo MX channel from January 9, 2018 and on Docomo Anime Store from January 10 of the same year. In addition to this, the site also announced that the second novel series will be serialized on the website

, focusing on the daily life of the kaiju girls from the anime series. The second novel series can be viewed here

The third entry in the series, an anime movie titled Kaiju Girls Black, revolving around GIRLS and a mysterious kaiju girl organization known as Blackstars. It will have limited theatrical release in Japan beginning on November 23, 2018.

Not to be confused with Kaiju Girl Caramelise.