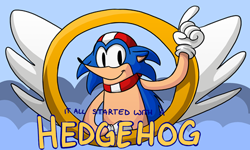 A hedgehog with a yarmulke to be exact.
Advertisement:

is a Sonic the Hedgehog Alternate Universe Character Blog created by Consuelo, aka Calamity Jane where any average Joe on the internet can ask up to fifteen characters questions (though certain characters are less likely to answer than others, see here

The blog, drawn in a simple yet strange art style which looks like it's from a modernist art piece, is set in an alternate continuity (known as the Calamitous Zone) that takes elements from the games, the comics, the OVA, and everything in between and merges them into one cohesive whole. While most characters retain some semblance of their canon personalities, their portrayal and backstory varies wildly (Sonic is Jewish, Silver is half-robot, Eggman's motives differ

, etc.) Questions range from being character-focused to being setting-focused, and there’s some very thorough Worldbuilding involved.

Always Having Juice provides examples of