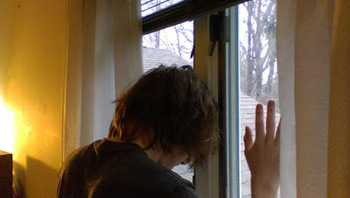 Evan Crose, The Animated Critic, regretting his life decisions. You can thank Stiffy Woods for that

"Animation. I love animation. In fact that's why I created this blog. With animation you can tell some of the most beautiful, well-told, funny, creative, imaginative stories ever told. But like all great mediums there's crap"
-Evan, The Animated Critic, talking about why he started the blog.

Animated Critic is a Blog run by Evan Crose with occasional help form his brother, Max (A.K.A. 8 Bit Max). On the blog they review animation from SpongeBob SquarePants to Family Guy and even Anime

He does many things on the blog

You can find the blog here.

On November 18th 2015 Evan announced a Webshow would be made and would be a companion series to the blog. It's finally out and you can find it here.

The show does also have a storyline in the same vein as Atop the Fourth Wall and is the first entry within the Animated Critic Universe.