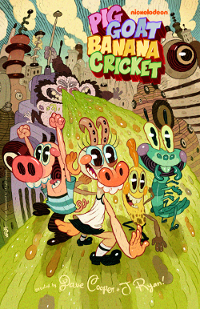 Pig Goat Banana Cricket is a Nickelodeon cartoon created by Canadian artist Dave Cooper and American cartoonist Johnny Ryan, both of whom had previously worked together making comics for Nickelodeon Magazine. The series follows the interlocking misadventures of four college roommates: Pig, Goat, Banana, and Cricket in their city.

The series was adapted from a Nick Cross short on YouTube named Pig Goat Banana Mantis! The supposed reason for the change in Mantis' name was that another Nickelodeon cartoon had a character named Mantis.