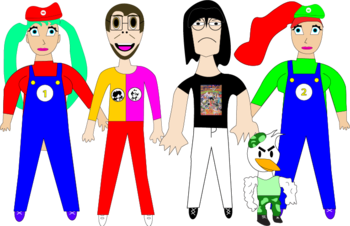 "I Demand a Dairanger 50 years later on 2043-2044, Which isn't that far away when you think about it., But Yeah that review topped mine, just try topping my Megaranger or Carranger reviews!!!!!"
—A. Yoshi challenging EZ Rider to make a better review Carranger and Megaranger of Either or Both

Bob "A. Yoshi" Duck (Real Name: Unknown) created the Blog at first as a School project, it was known as "The Anonymous Yoshi Blog". Over time, As It updated more and got turned into an Opinion based blog, with Reviews, Rants, occasional news, lists. and even History Pieces (including, but not limited to Consoles from the PC Engine/TurboGrafx-16 to the Dreamcast, Shonen Weeklies, and Cartoons such as Beast Wars and Action League NOW! He also had other projects, and series like Yoshiette Adventures (An episodic story based spinoff based around Yoshiette 1, usually Ending rather bad), and Gaming Bits (which discusses all topics based off Video Games... but one series pretty much sums up how Crazy He is, and It's where he reviews Kinnikuman from Start to Finish (well, except for Nisei and the revival series, but still, Dang). However, He did have several projects cancelled (usually after he slows down, and stops at a green light), Examples include, Random Rubbish Roundup (and all it's variants), or even Ohranger Vs. B-Fighter (a fan fiction that only got to two chapters, and it was indefinitely delayed until it reached Nevember (AKA It was Canned)). One segment changed things on his site... Forever, and it was his foray into real Video making, that was... The A. Yoshi Show!