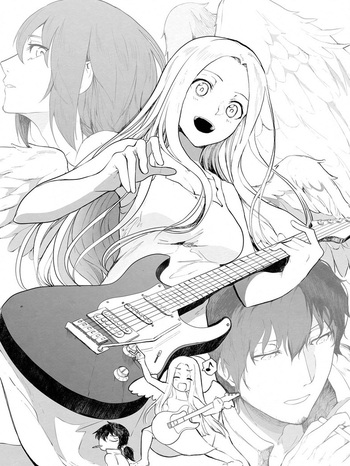 The world has ended, so why have humans refused to end with her?

Angel Notes, also known as Notes., is a science-fiction short story by Kinoko Nasu. Despite not being officially released overseas, an English fan translation can be read here.

The planet Earth is dead, killed by human pollution and warfare. Yet humankind manages to survive through enhancements and modifications, resulting in the A-rays and the Liners. These two races wage a great war against each other in the harsh environment of their dead planet, nicknamed "the Land of Steel". However, that very war is interrupted by the eight Aristoteles, which descended to the Earth at Gaia's final death cry: to destroy the remnants of the human race that remain on her corpse.

The story begins with an anti-Aristoteles operation above the troposphere. Of the AI-piloted planes deployed to carry out the mission, only one remains in the air: the craft that carries "Gun God" Godo and the corpses of his comrades. Eventually, he snipes and kills a winged Aristoteles—the Type-Venus—with his Black Barrel, a gun that is capable of killing gods.

Five years later, Godo now lives in the last city on Earth with plant life, born in the place where the Type-Venus fell. In one of the few cities left in the Land of Steel, the last true human comes home to find an angel named V/V there. She tells him that she is here to cook, clean, and play the guitar. She is very bad at all of this—heck, her guitar's untuned—but she's pretty, and pretty impossible to kick out, so Godo eventually learns to tolerate her.

This doesn't last for very long, for another Aristoteles is coming to destroy the planet. Gun God has to leave once more in order to prevent the approaching Type-Saturn from reaching the planet.

Angel Notes sets the foundation for some major concepts of the Nasuverse (and is probably set in the distant future of the Fate/EXTRA timeline, or the Dust of Osiris' timeline, or the alternate universe from the main Fate/kaleid liner PRISMA☆ILLYA verse, although it could also theoretically happen in any timeline), such as the Earth being a living being (Gaia), and the concept of the Ultimate Ones.

Tropes found in this short story: