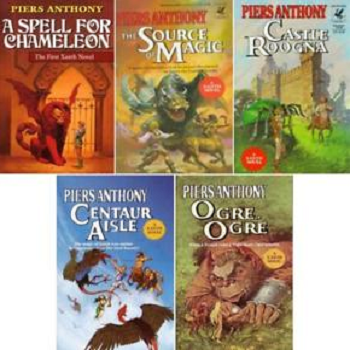 The novels that started it all.
What do you get when you take a rather witty (and long-running) American author, create a Fictional Counterpart of the entire state of Florida, give everyone in it magical powers (or "talents") to make a Magic Kingdom, if you will (...geddit?), fill it with various deconstructive parodies of fantasy tropes and top it all off with literally hundreds of reader-submitted puns?
Advertisement:

In a nutshell... you get Xanth.

The Xanth series by Piers Anthony takes place in a small Florida-shaped realm of a dimension other than Earth. In Xanth, magic is real, with its own physical laws, often based on reader-submitted (and credited) puns. Billions, and billions of puns. For example — Pineapples are explosive (aka pineapple fragmentation grenade

). Cherries (cherry bombs) are smaller, but still dangerous. Tulips (two lips) will kiss you if you get too close. Boot rear is a fizzy soda that, when drunk, causes you to feel a swift kick to your bottom. And beware the Catastrophe — a plaque with the back half of a cat stuck into it (a cat-ass-trophy).

Yes, you're allowed to groan after reading some of those.

One important rule for Xanth is that every single native-born Xanth human has a unique "talent" — a magical quirk that only they can do. This can be anything from changing their hair color, to being able to talk to certain animals, to being able to "enhance" whatever is in front of you temporarily (whether that is to "enhance" someone's muscles, "enhance" a car's engine, etc.), to being able to rewind time or warp reality in their nearby vicinity. Talents are unique to the person who has them — no two talents are the same, but some are so similar that they are more or less identical; "turn stuff blue" versus "turn stuff azure", for example.

The first book, A Spell for Chameleon, was written in 1977, and the series continues to this day (with #41 releasing in 2017 and more just waiting for publication), recently entering its 2nd trilogy. In typical Piers Anthony fashion, he declared the first trilogy over after the 27th book (3 Cubed, or 3^3, is 27) Cube Route. Xanth has even inspired a "fan book", a novel-length work of collaborative fiction that Piers Anthony has mentioned positively in his official newsletter.

The Xanth novels contain examples of: