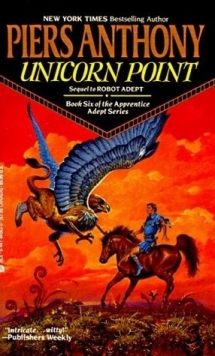 The Apprentice Adept series is a seven-book fantasy and science fiction series by Piers Anthony. The series takes place on two worlds occupying the same space in two different dimensional planes: Phaze - a Magical Land in Medieval Stasis and more or less ruled by the Adepts, the strongest magic users, each specializing in a separate aspect, and Proton, a barren mining planet of high technology, ruled by the Plutocratic Citizens (who control the immense wealth of the Protonite mines). The worlds are divided by the Curtain, an energy field only visible to those capable of crossing it (i.e. someone without a counterpart on the other side).

The first trilogy (Split Infinity, Blue Adept, and Juxtaposition) starred Stile, a Proton serf who, after a mysterious assassination attempt destroyed his career as a race jockey, becomes the central figure in an ancient prophecy to Save Both Worlds from destruction, or ensure said destruction. The first three books, a standalone series in their own right, were originally known as the Split Infinity trilogy, and only lost this title after the four sequel books were added.

The second trilogy (Out of Phaze, Robot Adept, and Unicorn Point) featured Bane and Mach, the sons of Stile and Stile's opposite number, Blue, and their efforts to keep the previous impending doom from happening all over again.

The seventh and final book, Phaze Doubt sees both worlds dealing with an alien invasion, and the Batman Gambit meant to deal with it and prevent future ones.