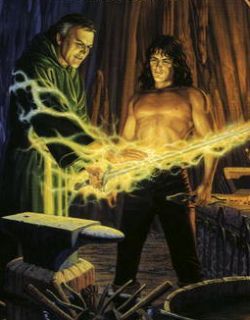 There will be born one to the Royal House one who is dead yet will live, who will die again and live again. And when he returns, he will hold in his hand the destruction of the world...
Advertisement:

In the magical land of Thimhallan, Magic is considered to be the same as Life. Those born with no magic are considered Dead. As an ancient prophecy tells of the destruction of the world by one who is Dead, those born without magic are routinely killed. However, royal-born protaganist Joram manages to escape this fate. Joining with a group of unlikely allies such as the elderly scholar Saryon and the erratic trickster Simkin, he plans to forge the magic-consuming Darksword and retake his royal position, unaware that doing so may bring the prophecy to fruition.