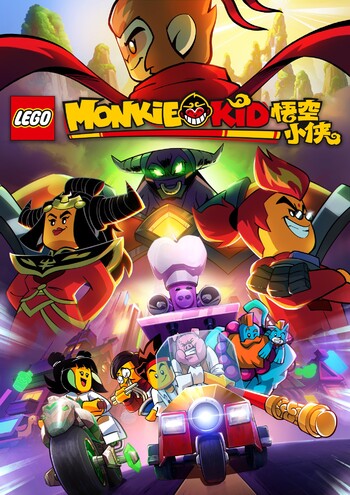 Familiar tales, all new adventures!
Monkey King: Look, I’m gonna come clean. Um, I've been kinda watching you.
MK: (flashbacks to the animals following him around) Wait, what?! That was you?!
Monkey King: Ha! That look on your face! You're perfect!
MK: Perfect for what?
Monkey King: To be… my successor!
Advertisement:

Monkie Kid is a 2020 LEGO TV show based off of the world-famous Chinese folk tale Journey to the West. It was produced by Flying Bark Productions (Rise of the Teenage Mutant Ninja Turtles, Glitch Techs) to coincide with the release of the theme's Lego sets.

Monkie Kid, or MK as his friends call him, is your average kid, but his world is completely changed when a noodle delivery turns into him discovering the resurrection of the great Demon Bull King the fabled ultimate enemy of MK's hero, The Monkey King.

The series premiered in Malaysia with a 45-minute TV special (A Hero Is Born) in June 13, 2020. Season one then premiered on September 13 of that year in Malaysia, with 10 episodes, and Season Two's TV special (Revenge of the Spider Queen) would then premiere on March 27, 2021, with the rest of the season beginning its premiere in May 1, 2021 in Australia. Season 3 would begin premiering in China on April 17, 2022.

After more than a year since the series began, the series will be made officially available on Amazon Kids+ on September 9, 2021 in several other countries (The United States particularly, along with the United Kingdom, Canada, Germany, and Japan), with the second season being set to officially release later in 2022.