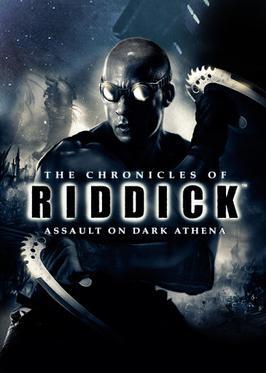 "They say... hope begins in the dark. But most just flail around in the blackness... searching for their destiny. The darkness, for me, is where I shine."
— Riddick
Advertisement:

The second of two games set in The Chronicles of Riddick universe. Assault on Dark Athena is a sequel to the 2004 game Escape from Butcher Bay. It also features an HD remake of the entire Butcher Bay campaign.

Dark Athena's story begins where Butcher Bay left off after Riddick and Johns escaped together. While in stasis sleep, they are taken forcibly aboard the Dark Athena, a massive mercenary vessel. The ship is run by Gale Revas (Michelle Forbes) and her second-in-command, Spinner. Whilst Johns is captured, Riddick manages to escape and must now fight his way off the ship to safety.

Whilst the game's AI showed its age a bit and the multiplayer disappointed, it was received very well and proved to be enjoyable to fans of the first game and newcomers alike. It was also praised for its great voice acting.