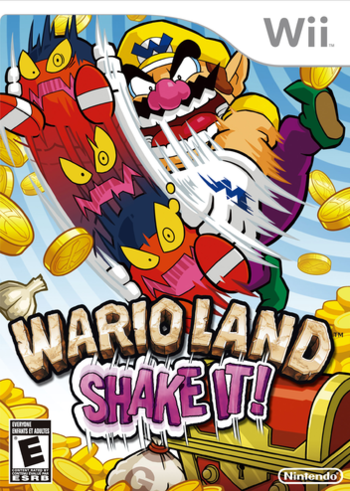 Wario Land: Shake It! (subtitled The Shake Dimension in European languages) is a platform game on the Nintendo Wii, released in 2008. It's the only game in the Wario Land series to be released on a home console instead of a handheld, excluding the 3D spin-off Wario World. The gameplay here is similar to Wario Land 4. This game's main gimmick is that shaking the Wii Remote causes Wario to rapidly shake anything he's holding (such as a bomb, an enemy, or a sack of gold coins) or to perform an Earthshake Punch, a move that rattles the screen and causes various changes to Wario's environment.

The story concerns Captain Syrup stealing an ancient globe that turns out to be a portal to an alternate realm called the Shake Dimension, inhabited by peaceful pixie-like creatures called Merfles but ruled by a ruthless Viking named the Shake King. The Shake King has kidnapped the Shake Dimension's Queen Merelda and stolen the bottomless coin sack, a sack that never runs out of gold coins no matter how much you shake it. Captain Syrup mails the globe to Wario, who accidentally releases the only Merfle that managed to avoid capture at the hands of the Shake King. The Merfle explains his predicament and Wario agrees to lend a hand, ostensibly to rescue Queen Merelda, but actually because he has his eye on that bottomless coin sack.

Wario journeys across the five continents of the Shake Dimension, gathering coins, finding hidden treasures, and rescuing a Merfle at the end of each level. After freeing the captured Merfle, he must high-tail it back to the level's entrance before a timer runs out and the Shake King appears to steal back his loot. Each continent has four regular levels, a boss fight, and up to three hidden levels accessed by finding hidden maps. Every level also has three to seven missions for Wario to complete, as well as three (often comical) treasures.