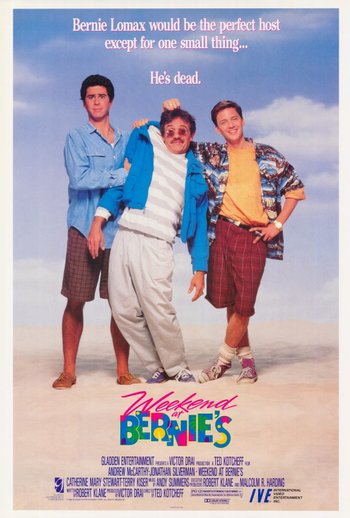 ...and what a weekend it was.
"What kind of a host invites you to his house for the weekend and dies on you?"
Advertisement:

A 1989 comedy film in which junior actuaries Larry Wilson (Andrew McCarthy) and Richard Parker (Jonathan Silverman) get duplicitously invited by their scheming boss Bernie Lomax (Terry Kiser) to his fancy Long Island beach home for the weekend. Hilarity Ensues when Bernie is murdered (by someone else) and circumstances force the hapless duo to lug his corpse around, pretending he is still alive.

Unsurprisingly, the film's title was originally used as the name for the trope Of Corpse He's Alive.

A sequel was released in 1993 (tag-line: "Bernie's back ... and he's still dead!"), which is even more ridiculous than the original thanks to the addition of voodoo.

The first film was directed by Ted Kotcheff (yes, he of First Blood fame). Robert Klane wrote the screenplay for both films and also directed the sequel.

Rachel is apparently afraid to let anyone know her favorite movie is Weekend At Bernie's.

Rachel is apparently afraid to let anyone know her favorite movie is Weekend At Bernie's.