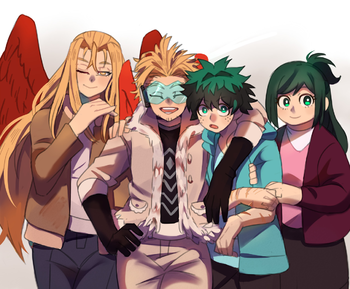 Hawks doesn't usually patrol Hosu, but with the attack on Ingenium last week, Stain needed to be taken down yesterday. As Stain continues to avoid capture, the Hosu Pros need all the help they can get.

His intern Tokoyami brings to Hawks' attention a mysterious text Tokoyami received from his classmate with the message containing coordinates to a nearby alleyway. Hawks, fearing that Tokoyami's classmate may be hurt or have been attacked by a Noumu, Hawks and Tokoyami head to the message's coordinates.

Hawks comes across three of Tokoyami's classmates fighting for their lives against Stain and trying to defend a downed pro-hero. When Hawks gives much-needed aid and attacks Stain, never had he expected how much future events would change things.

A series by Barid (Finale)

. The first part titled Crimson Wings and Emerald Lightning can be found here.

The same author has also written Build Yourself Up (Don't Let Them Break You Down), a For Want of a Nail fic in which Izuku becomes famous after the sludge villain incident thanks to Hawks intervening in place of All Might.