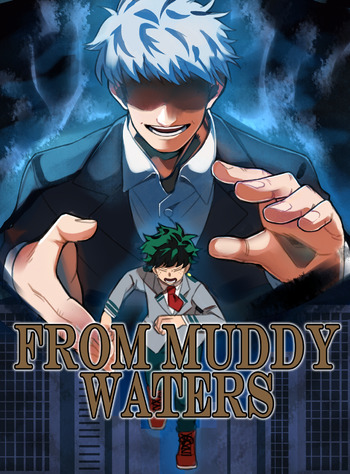 Izuku first discovered his Quirk when he's three years old. His father split his skin open by accident after returning home from work. Izuku, being the dumb little kid he was, kisses it to make the pain go away. Much to his delight, he's breathing fire just minutes later. Then the training began, with Izuku getting more and more Quirks from dear-old-dad, not even telling his mom as part of their daddy-son secret. Soon, Izuku was proudly showing off his new Quirks to the kids at school. Everything was perfect.

When he's eight years old, Izuku discovers the horrifying truth. His father had been stealing Quirks from heroes he's killed to stockpile them for himself and give them to Izuku. Suddenly those gifts became shackles, as All For One definitely wasn't going to let his wife and son go. So when the villain is nearly killed by All Might, Japan's greatest hero, Inko and Izuku take whatever they can and never look back.

In the present, Izuku is still hoping to follow his dream of becoming a hero. He's kept his past under wraps for years and even topped the U.A. Entrance Exam. But he knows better than to let his guard down. His father is still alive, and nothing is going to stop him from dragging Izuku back into the muddy waters from which he came.

is a My Hero Academia Fanfic that takes the popular fan theory of All for One being Izuku Midoriya's father and asks what would happen if Izuku had his Quirk and wanted to be a hero regardless.

The answer seems to be a great deal of trauma, especially since All for One is a possessive bastard with no intention of letting his little boy or his wife go.

As of March 2021, the fic has been officially abandoned by the author. However, HLine did post the outline they had planned for the rest of the fic so that readers would not be completely left hanging, which can be read here

From Muddy Waters provides examples of: