Film / Welcome to the Jungle 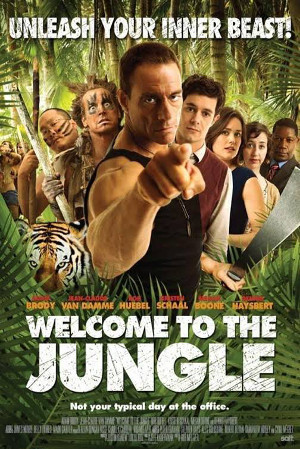 Not Your Typical Day at the Office
Advertisement:

Welcome to the Jungle is a 2013 comedy film directed by Rob Meltzer, and starring Jean-Claude Van Damme, Adam Brody, Megan Boone, Rob Huebel, Kristen Schaal and Dennis Haysbert. Adam Brody is Chris, an unappreciated advertising exec whose achievements are overshadowed and outright stolen by his co-worker Phil (Huebel) while he lusts after HR employee Lisa (Boone). His company sends all of the workers on a weekend wilderness team-building event, run by "military man" Storm Rothchild (Van Damme). Hilarity ensues when the team gets stranded on the island, Storm is eliminated by a tiger, and civilized nature rapidly breaks down with Phil attempting to establish himself as supreme ruler over the tribe. Chris is forced to confront his personal neuroses and take on a leadership role. Lord of the Flies gets name-checked.

Not to be confused with the 2003 Dwayne Johnson vehicle, The Rundown, which was released as "Welcome to the Jungle" in many territories outside the United States, nor with the sequel to Jumanji.