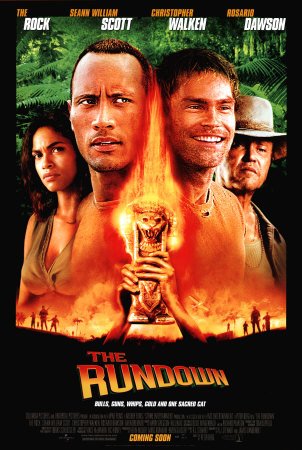 Temple of Doom called. They want their poster ba-
Advertisement:

Beck (Dwayne "The Rock" Johnson) is a Bounty Hunter who wants to quit the business and open a restaurant, but his boss Billy sends him on one last assignment: Go down to the Amazon and bring his wayward son Travis (Seann William Scott) back to Los Angeles. So Beck heads down to the Amazon, where he meets eccentric Scottish airplane pilot Declan (Ewen Bremner) and finds a totalitarian regime run by Hatcher (Christopher Walken), who double-crosses Beck shortly after he finds Travis.

Beck and Travis flee to the jungle where, after some obstacles (including a run-in with wild baboons), they join up with a rebellion led by Mariana (Rosario Dawson), an acquaintance of Travis', and go on a search for an ancient artifact Travis has been searching for.