Film / The Saddest Music in the World 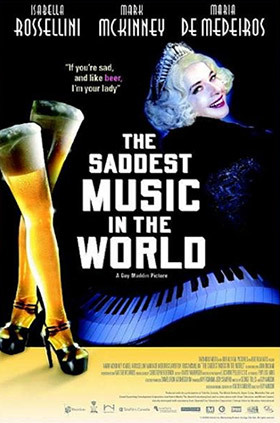 "If you are sad and like beer, I'm your lady."
— Lady Helen Port-Huntley
Advertisement:

The Saddest Music in the World is a 2003 Canadian film directed by Guy Maddin, starring Isabella Rossellini and Mark McKinney.

Set in Winnipeg during The Great Depression, a legless baroness host a contest for the saddest music in the world, with a grand prize of $25,000. During the assembly of contestants a father and his two sons; one who thinks he's an American, one who is succumbing to madness over the death of his son and his ex-lovers nymphomaniac tendencies and the father a pathetic drunkard who fucks everything up. Their unique dynamics with the beer-baroness and tragedy bring these characters together to express their deep feelings of pain and give in to treachery.