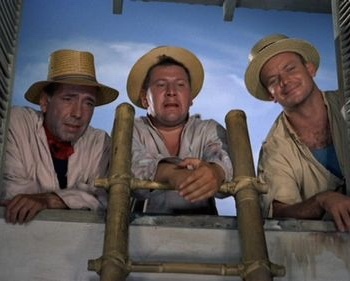 Isabelle: You don't look like a criminal to me.
Albert: If crime showed on a man's face, there wouldn't be any mirrors.
Advertisement:

Shortly before Christmas in 1895, unapologetic convicts Joseph (Bogart), Albert (Ray), and Jules (Ustinov) escape — along with Albert's pet viper, Adolfe — from the infamous Devil's Island prison in French Guiana. After dodging search parties, they seek refuge in the shop of Felix Ducotel (Leo G. Carroll), who is struggling to make ends meet under the overbearing supervision of his cousin Andre (Basil Rathbone). Given the spirit of the Christmas season, the trio decide to assist Ducotel, his wife Amelie (Joan Bennett), and their daughter Isabelle (Gloria Talbott) the only way they know how.

Adapted from the stage production My Three Angels by Sam and Bella Spewack, itself based the French play La Cuisine des Anges† "The Kitchen of the Angels" by Albert Husson. Loosely remade as a 1989 film directed by Neil Jordan, written by David Mamet, and starring Robert De Niro, Sean Penn, and Demi Moore. In this version, the setting is changed to upstate New York during The Great Depression, and the escaped convicts (now reduced to a duo) masquerade as priests. Despite earning moderate critical acclaim, the remake was a box-office flop.

The original 1955 film provides examples of:

Tropes in the remake: