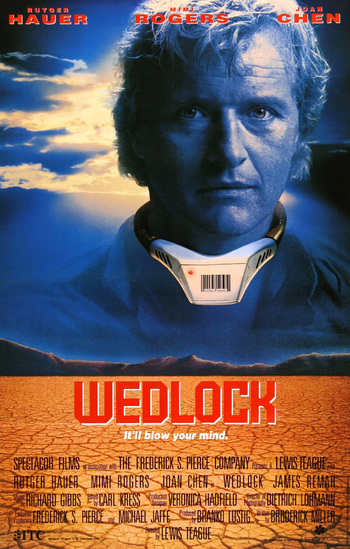 Frank Warren (Hauer) is a whiz with electronics. He teams up with his fiancee Noelle (Chen), who's something of a Manic Pixie Dream Girl, and a buddy of his, Sam (James Remar), in order to rob a vault of jewels.

Unfortunately, they get busted, and in the process of getting away from the cops, Frank ends up (rather involuntarily) taking the fall so Sam and Noelle can escape jail time. Frank goes to a new kind of prison: all prisoners wear special necklaces, keyed to explode if they ever get more than 100 yards from each other. Only, it so happens the system can be subverted. Enter an annoying fellow prisoner, Tracy Riggs (Rogers), and a rather nasty badass prisoner, "Emerald" (Basil Wallace), who effectively runs things.