Human Outside, Alien Inside 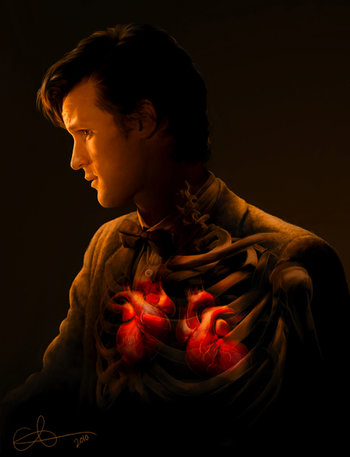 Image by euclase. Used with permission.
Kim: I've got to be honest, I wasn't expecting something so different.
Tal: Neither was I. Our species look so similar... well at least on the surface.
Kim: I would've never guessed when it came down to the basics. Well, let's just say the birds and bees will be very confused.
— Star Trek: Voyager, "The Disease"
Advertisement:

Let's face it: Building a truly elaborate alien costume costs money, more than the budget will safely allow. However, Rubber-Forehead Aliens, cheap as they are, just won't cut it forever.

One safe way to get around the latter problem is to suggest that while on the outside they're exactly the same, on the inside of your alien, anything goes. If you were to dissect the average TV alien, it would look like someone had torn a squid apart and stapled it to the remnants of a rump roast.

Once this is done, the alien sounds suitably... alien-y. Of course, now the producers have to make sure the creatures are gutted only off-camera.

This not only applies to physical organs, but biochemistry as well. Funny colors of blood, odd allergies, complicated mating rituals (or mating organs), Bizarre Sexual Dimorphism, funky dietary requirements (or intoxicants) or interesting bowel movements are all common. Sometimes even their minds are totally different, making communication with them problematic.

The less human-looking the alien is outside, the less likely this trope will be resorted to. This can lead to the ironic trap of Serkis Folk and other more elaborate aliens falling on the other side of the Uncanny Valley and thus seeming, on some level, more human than the Human Aliens or Rubber-Forehead Aliens if they appear in the same series.

Aliens may also be shown to have immunity from things that are plenty lethal to your average person, being able to survive heat and cold extremes unprotected, tolerate massive doses of radiation, being a living bulletproof vest, or be unaffected by poisonous materials. On the other hand, they could also be negatively affected, or perhaps even injured or killed, by a substance that would be completely harmless to an Earthling.

Interestingly, this isn't inverted very often. Humans, even when they're the "aliens" of a story, almost never have flashy biological differences that make them anything but weaker than the rest of the cast.

For more literal and squicky examples of an alien "inside" a human, see Mobile-Suit Human, Genuine Human Hide, and Puppeteer Parasite.