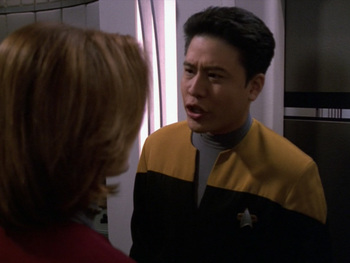 Harry Kim and Captain Janeway have it out something fierce, and wait till you hear the reason why.
Voyager assists the Varro, a rather paranoid and xenophobic species, in repairing the engines of their Generation Ship, while the crew, Harry included, pursue their own excitements aboard. Unfortunately, he forms a biochemical link with the lovely Tal, which causes his skin to glow and an insatiable desire in both of them, resulting in... rather strained relations with the Varro.