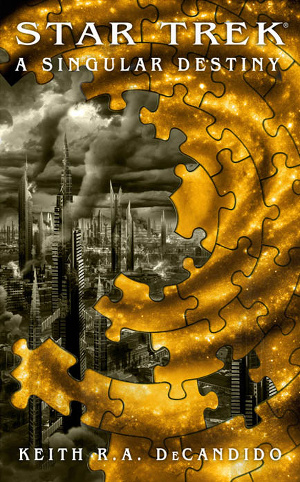 A novel in the so-called Star Trek Novelverse, the first follow-up to the Wham Episode trilogy Star Trek: Destiny. Essentially detailing the aftermath of the near-apocalyptic conflict in the Destiny trilogy, the novel also sets the stage for the Star Trek: Typhon Pact series.
Advertisement:

The cataclysmic events of Star Trek: Destiny have devastated known space. Worlds have fallen. Lives have been destroyed. And in the uneasy weeks that follow, the survivors of the holocaust continue to be tested to the limits of their endurance. But, strange and mysterious occurrences are destabilizing the galaxy's battle-weary Allies even further. In the Federation, efforts to replenish diminished resources and give succor to millions of evacuees are thwarted at every turn. On the borders of the battered Klingon Empire, the devious Kinshaya sense weakness — and opportunity. In Romulan space, the already-fractured empire is dangerously close to civil war. As events undermining the quadrant's attempts to heal itself become increasingly widespread, one man begins to understand what is truly unfolding. Sonek Pran — teacher, diplomat, and sometime advisor to the Federation President — perceives a pattern in the seeming randomness. And as each new piece of evidence falls into place, a disturbing picture encompassing half the galaxy begins to take shape, revealing a challenge to the Federation and its allies utterly unlike anything they have faced before.
Advertisement: