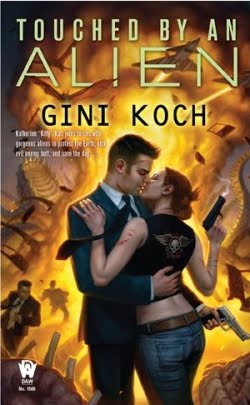 My crazy's working a lot better than your sanity.
Katherine Katt, Touched by an Alien

The Alien Series, written by Gini Koch, is a Science Fiction Romance Novel set in modern times. If Men in Black and Miss Congeniality had a baby, this would be it.

Marketing manager Katherine “Kitty” Katt steps into the middle of what appears to be a domestic dispute turned ugly. And it only gets uglier when the man turns into a winged monster, straight out of a grade-Z horror movie, and goes on a killing spree. Though Kitty should probably run away, she springs into action to take the monster down.

In the middle of the chaos a handsome hunk named Jeff Martini appears, sent by the “agency” to perform crowd control. He’s Kitty’s kind of guy, no matter what planet he’s from. And from now on, for Kitty, things are going to be sexy, dangerous, wild, and out of this world.