Manga / Boku no Futatsu no Tsubasa 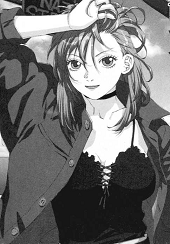 Mako is more than just a girl.
Boku no Futatsu no Tsubasa ("My Two Wings") is a manga by Toshiki Yui, which was serialized in Ultra Jump from 2002 to 2005.
Advertisement:

Hiromi is very excited that her cousin Makoto is coming to stay with her and her mother. Hiromi remembers playing with Mako when they were little and is hoping “he” has grown into a handsome young man. However, when Makoto shows up as a very buxom young woman it starts of a chain of misunderstandings, secrets and cover-ups.

This is an Ecchi manga and features adult situations, explicit sex scenes, and nudity. Some of this is played up as fanservice, but there is a lot of sex tied into the plot as well.

The manga includes examples of: