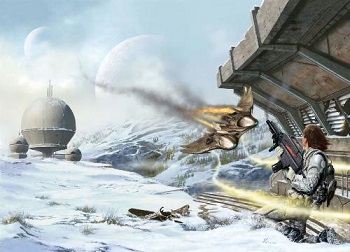 Cover art of The Heart of Valor, by Paul Youll

Torin: And the moral of the story: Never call a two star general a bastard to his face.
Captain Rose: I'm a little surprised you didn't already know that.
Torin: You and me both, sir. You and me both.
— The Better Part of Valor, by Tanya Huff
Advertisement:

The Confederation of Valor is a science fiction book series by Canadian author Tanya Huff. The lead character is Torin Kerr, a non-commissioned officer in the Confederation Marines. Alongside her fellow humans, the Confederation has recruited the Taykan and Krai to fight their battles as they've completely outgrown the desire, or even ability to fight. This becomes a problem when The Others, a war-like collective of various races, slowly start to attack Confederation space. The books follow Torin Kerr and the Marines serving under her as they face down various threats to their society and their lives.

Written with a sharp sense of humor and a lot of strong characterization, the series is well-worth reading, especially since Torin Kerr stands out as a true Action Girl who still manages to avoid any unnecessary sacrifices to the altar of Badass. It also manages the delicate balance between glorifying the combat and condemning it, often presenting the battles (and lives lost in them) as something that is a necessity, but not something anyone really enjoys.

The stories, while possessing a chronology, are very much self-contained in their own right as well and do not necessarily need to be read in order to enjoy them, though occasional Brick Jokes will make the experience more enjoyable.

In 2015, Huff began a sequel series, Peacekeeper, starring Kerr after her retirement.

The Confederation of Valor series provides examples of: