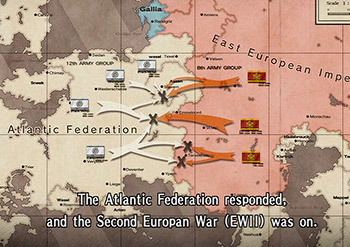 Totally not based on World War II.
Advertisement:

This trope deals with a story that features some sort of analogue of a real-world historical conflict in a fantasy or science fiction context in a different world from ours.

This is especially popular in Japan, since it allows them to tell stories utilizing the era of World War II without actively mentioning the war. Other common variations:

See also Recycled IN SPACE!, Fantasy Counterpart Culture, and Does This Remind You of Anything? Supertrope to Space Cold War. Compare and contrast Weird Historical War, which depicts a Real Life historical war, but with added fantastical elements.