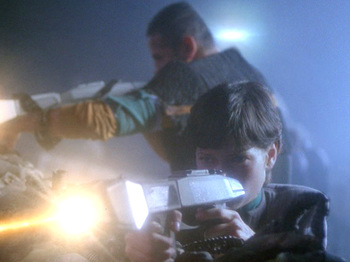 Don't fire until you see the white of their ketracel!
Advertisement:

The Defiant is about to go on a supply run to planet AR-558, the site of a Dominion communications relay that Starfleet captured. Bashir picks up some music from Vic Fontaine to deliver, while Sisko stews over the latest casualty reports before getting notified that the Defiant is ready. Onboard, Quark has joined the mission on orders from Grand Nagus Zek to get a Ferengi perspective on the war. As he vents to Ezri about his predicament, the ship comes under fire, and Quark rushes to the bridge to witness the ship destroy a Jem'Hadar fighter. Sisko leaves Worf in command as he beams to the surface with his away team.

Sisko and company come under immediate fire, but it turns out to be the Starfleet officers there to meet them. After five months on the front lines, they've become jumpy and exhausted. With their captain and commander dead, Lieutenant Larkin is in command. She tells Sisko that they are down to one-third strength and long overdo to be rotated out, but Sisko says they should expect to be there a while longer. His team sets to resupplying the defenders. Bashir treats the shell-shocked grunt Vargas, while the battle-hardened Reese dismisses Sisko's help given that he's set to leave soon. But when the Defiant comes under attack and needs to flee, Sisko decides not to beam away and instead stay to fight alongside the garrison.

The crew split up to help out. Ezri works with Crewman Kellman on finding a way to locate the invisible Dominion mines called "Houdinis" that have been killing off the Federation defenders. Quark is alarmed to find that Nog idolizes the defenders, particularly Reese, as heroes. Quark gripes that the Ferengi way would have been to negotiate a mutually acceptable treaty rather than fight. His fears for his nephew's safety get borne out when Nog gets shot in the leg on a scouting trip. Bashir operates, but Nog loses his leg, and he might not be a candidate for a prosthesis. Nog keeps on a brave face, however, assuring his uncle that he's fine. Quark confronts Sisko for using his men as cannon fodder, but Sisko angrily insists that he does care about his men.

Ezri and Kellin manage to decloak the Houdinis, and Sisko decides that they will relocate them to a chokepoint between the two based to kill Jem'Hadar when they come to attack. The defenders buckle down to prepare for an invasion, and everyone is on edge. Bashir plays the Vic Fontaine music to ease the men's nerves. Quark stays with Nog in the infirmary. The defenders hear explosions and screams as the Jem'Hadar stumble into their trap and reveal their impending attack.

The surviving Jem'Hadar rush into view, and Sisko orders everyone to open fire. It's a huge phaser fight. The Jem'Hadar break through the Federation barricade and engage in brutal close-quarter combat. Vargas goes down with a knife in the back. Kellin saves Ezri's life and then gets killed himself. Bashir gets hit. Sisko and Reese both fight off Jem'Hadar soldiers and help push them back. In the infirmary, Quark hears someone approaching and beats a Jem'Hadar on the draw, saving his and Nog's lives. Sisko gets knocked out, and when he awakens, Reese announces that the day is won.

Reinforcements finally arrive to take the defenders' places. Reese describes the green troops as "kids," but Sisko says that they will grow up fast. Back on the station, Sisko receives the latest casualty list of 1,730 names. He grimly tells Kira that every name is a person, and it's important to remember their sacrifice.