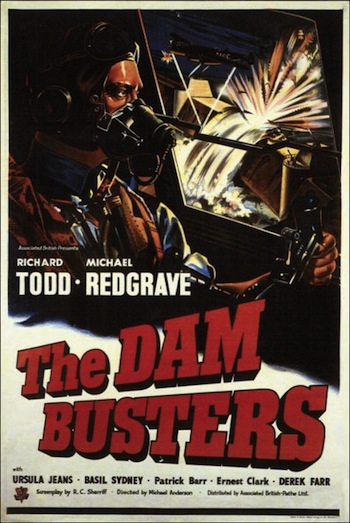 Calling T for Troper!
Official: You say you need a Wellington Bomber for test drops. They're worth their weight in gold. Do you really think the authorities will lend you one? What possible argument could I put forward to get you a Wellington?
Barnes Wallis: Well, if you told them I designed it, do you think that might help?
Advertisement:

The Dam Busters is a 1955 British film starring Richard Todd and Michael Redgrave. The story of the Dam Busters is one which brings out several features of the British — the sophistication of their engineering innovation, the bravery of their armed forces, the incompetence of their leaders and their unerring ability to be first in a technical field and then leave it to others to make money out of it (for example, see Babbage and Turing...or Whittle...)

At the beginning of WW2, the great engineer (then not yet Sir) Barnes Wallis (played by Redgrave) pointed out that bombs rarely did much damage to hardened military installations unless they hit them right on the button (and often not much even then). What you needed was a way of transmitting ALL of the bomb's energy into the target rather than spending most of it on the air. Barnes Wallis proposed that bombs should be designed so that they penetrated the ground AROUND the target rather than hitting it directly, and then went off UNDER it, causing a local earthquake and hole, into which the target would fall. The idea was brilliant and would have worked perfectly, but his initial proposal called for a bomb so large that no aircraft then in existence could carry it and the six-engined "Victory" bomber Wallis designed to do the job would have been little use for anything else and hideously expensive besides, so the Air Ministry were less than enthusiastic.

Finally, when he was allowed to work for the war effort, a targeting committee took him at his word when he said that dams were a good example of a target, and suggested that he take out the main Ruhr dams, at night, when precision bombing would be out of the question, and when the Germans were defending against torpedoes with a series of nets.

Barnes Wallis came up with the idea of making a 5-ton spinning bomb which would skip across the water, hit the dam wall, then sink to the bottom before exploding. Thus the water itself would focus the force of the blast against the dam's wall, in much the same way that a good torpedo hit causes more damage to a ship's hull than would an equivalent amount of explosives in a bomb or artillery shell. These were duly made in a tearing hurry and delivered by a crack team flying Lancasters in pitch darkness 60ft over water, nearly half of whom did not come back. The bombs worked, though the most important dam survived and the impact on the German war effort from destroying the others was somewhat underwhelming.

Having suffered almost 50% losses for disappointing results, the British mothballed the bouncing-bomb concept and never attacked the dams again, letting the Germans rebuild them. Barnes Wallis was allowed to develop his 'earth penetrator' bombs which were staggeringly effective — taking out bridges and viaducts, sinking the Tirpitz, stopping the V2 and V3 developments, destroying U-boat pens at Brest with 33ft reinforced concrete roofs and in one attack, and blowing up a railway line which ran under a mountain by dropping the bomb THROUGH the mountain and into the tunnel beneath.

Such a weapon would be of inestimable value for precision attack against individual targets of the kind we have had in the many small wars since 1945. So it figures that the British establishment promptly forgot about all the oily rag theory that Barnes Wallis had worked so carefully on, and just kept making airburst bombs which remain inefficient. The British people, on the other hand, remember the astonishing sight of 5-ton bombs bouncing along the surface of a reservoir, and think to this day that that was the whole purpose of the mission.

617 Squadron, the RAF unit tasked with all this, still exists and flies F-35 Lightnings today.

Paul Brickhillnote famous for living through, and then writing an account of The Great Escape wrote a novelised history of 617 Squadron's WWII action, called The Dambusters'', they made a movie about it, released in 1954. A remake is planned for 2010 2011 or maybe 2012.

Notable for its influence on a little movie called Star Wars: the trench run was heavily inspired by the climax of the film. Several lines of dialogue are actually re-used, nearly verbatim. It's also known for having several clips used in the 1982 film version of Pink Floyd's The Wall.

A young Patrick McGoohan has a bit part as a guard.

The movie is a classic and contains examples of:

In a Carling Black Label advert spoofing The Dam Busters, the British pilots all have their voices distorted by their oxygen/radio masks as per the movie, until two of them remove their masks so they can speak normally. At least the pilot doesâturns out his copilot's normal voice sounds just like the radio voice.

In a Carling Black Label advert spoofing The Dam Busters, the British pilots all have their voices distorted by their oxygen/radio masks as per the movie, until two of them remove their masks so they can speak normally. At least the pilot doesâturns out his copilot's normal voice sounds just like the radio voice.