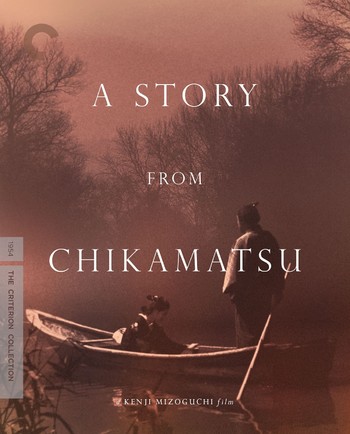 The Crucified Lovers (近松物語, "A Story from Chikamatsu") is a 1954 directed by Kenji Mizoguchi.

It is based off a play from 1714. Ishun is the "Grand Scroll Master" to the imperial court in Kyoto. He produces calendars and scrolls, and has become quite wealthy at this business. He is however an incredible cheapskate. When his wife Osan asks him for five kan (a relatively small amount of money) for her ne'er-do-well brother Doki, Ishun contemptuously declines. Ishun is however more than willing to give money to Otama, the pretty maid, because he wants to have sex with her. Otama, who is petrified of her master, refuses his advances.

Meanwhile, Osan still needs the money for her brother. She goes to Mohei, a kind-hearted assistant in her husband's firm, and asks him for help. Mohei agrees, and pilfers Ishun's seal in order to make out an order for five kan. Naturally, he is caught, and imprisoned in Ishun's house to await the police. Osan is not implicated, but that night Mohei tries to run away and Osan tries to stop him. When they both fall to the floor as she tries to restrain him and they are seen by another servant, Osan is presumed to be having an affair with Mohei. A series of tragedies ensue.