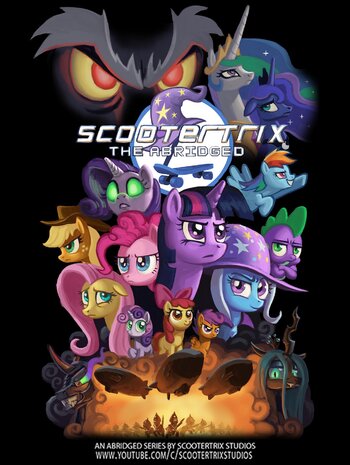 "Once upon a time, in the magical land of Equestria there were two regal princesses who ruled all. The older princess was so powerful that she could raise and lower the sun! The other one, uh, kinda sucked."
Advertisement:

Scootertrix the Abridged is an Abridged Series of My Little Pony: Friendship Is Magic created by Jack Getschman.

The series follows the episodic structure of MLP closely, with one ten-minute episode for each episode of the show's first season in its original airing order. However, the overarching plot gradually diverges from that of the canon show, gearing toward a wartime story.

Equestria's Mundane Fantastic setting is mostly played straight, which gives the series plenty of ammunition for parody and deconstruction of the show's inconsistencies and fairytale aspects. Like many Abridged Series, it also plays with the Fourth Wall, making it an integral part of the world's workings.

As a late contender on the MLP Abridged scene, the series makes itself unique by not parodying just the original show but by also referencing already existing abridged series and subverting common tropes.

There was also a Crossover (with another MLP abridged series, Friendship Is for Adults) titled "Scootertrix Is for Adults". This crossover led to the spin-off series Royal Correspondence

, which focuses on the Princesses of both universes.

After a full season corresponding to the original show's Season One, plus several bonus episodes and a Movie, Scootertrix the Abridged came to a definitive end with Episode 26. But Getschman couldn't stay away from this universe for good, and is now releasing a follow-up series titled Scootertrix the Epilogue.

You can watch the whole series on YouTube here