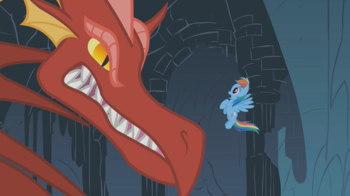 A sleeping dragon's smoke is disrupting the skies of Equestria, and Princess Celestia gives Twilight Sparkle the task of getting it to move on. Most of her friends are eager to help, save for Fluttershy, who keeps trying to tell Twilight she's too scared to face a dragon (to be honest, she's scared of a lot of things — heights, falling leaves, her own shadow...) Twilight ignores Fluttershy's reluctance, insisting that she has to come along because of her unique talent with animals.

The Mane Six set out, but once they reach the mountain the dragon's taken up residence in, Fluttershy's wings lock up in fear, leaving Applejack to literally drag her up. As they continue making their way up, Fluttershy continues to be a burden, slowing the group down and accidentally causing a rockslide which further delays their progress.

The ponies finally reach the dragon's cave, ready to confront the sleeping beast. Well, almost ready; Fluttershy refuses to go any closer, finally blurting out that she's afraid of dragons. Even when her friends point out that she's faced a manticore and that she's not scared of Spike (granted, he's a baby dragon), she knows what she's afraid of and won't change her mind. Twilight gives up and decides to proceed without Fluttershy's help. She tries being diplomatic with the dragon, asking him nicely to leave, but it doesn't work. Rarity tries charming him, but her tactic fails when she looks a bit too longingly at the dragon's hoard of gems. Pinkie tries laughter and...well...you can see where this is going. Things take a turn for the worse when Rainbow Dash tries to settle the issue head-on; the dragon gets angry and knocks everypony to the ground, save for Fluttershy, who's been hiding.

As it turns out, that was a bad idea.

The meek little pegasus gets so angry at the dragon that she completely forgets her fear and flies up to face it, speaking to it sternly and letting him know once and for all that you do NOT hurt her friends. Fluttershy gets so intimidating that the dragon actually breaks down and cries. Returning back to her calm and nurturing self, Fluttershy comforts the dragon, and tells him nicely that he has to leave. As the dragon flies off to find somewhere else to nap and the clouds of smoke get cleared up, Twilight writes to the Princess about what she's learned that day. Meanwhile, Rainbow Dash gets spooked by Pinkie imitating a dragon's roar and Fluttershy reassures her that "not everypony can be as brave as me"... right before a leaf lands on Fluttershy, scaring the daylights out of her.