Recap / My Little Pony: Friendship Is Magic S1 E25 "Party of One" 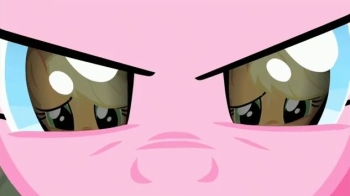 Pinkie Pie isn't quite herself today. (Andrea Libman really earned her pay that week.)
Pinkie Pie: Sure, Rainbow Dash and Fluttershy had to house-sit for that vacationing bear, but what are the chances all my other friends would have plans this afternoon, too?
Written by Meghan McCarthy
Advertisement:

Pinkie Pie holds a birthday party for her pet alligator, Gummy, inviting all her friends. Afterwards, all the guests compliment Pinkie on the great party, with Twilight saying "We should do this again soon!". Pinkie, being Pinkie, interprets this a little too literally...

The very next day, Pinkie shows up at each of her friends' houses, eagerly offering invitations to Gummy's "after-birthday party" that afternoon. Her friends, however, aren't as enthusiastic...

(Fluttershy and Rainbow Dash don't get a chance to say this, as Pinkie Pie finishes their statement for them.)

All of them offer excuses for why they can't come, but it isn't until Pinkie gives herself time to think about it that she realizes this.

Once she notices Twilight picking up a package from Sugarcube Corner (instead of studying, like she said she would be), Pinkie decides to investigate. After sneaking around Ponyville in disguise, overhearing several secret conversations between her friends, angrily chasing Rainbow Dash around town, and a tense exchange with Applejack, Pinkie suspects that her friends don't like her or her parties anymore. To get some confirmation on her suspicions, she interrogates Spike into giving her information, even bribing him with a bowl of gems, but gets frustrated when he doesn't know what she's talking about.

Pinkie is satisfied at seemingly having her suspicions confirmed, but immediately feels depressed and lonely upon thinking she's lost her friends, to the point where her poofy hair deflates and her color scheme becomes muted and dull.

In her mentally unhinged state, Pinkie ends up holding a morose and disturbing second party with several inanimate objects as her new "friends". Rainbow Dash stops by, apologizing for her behavior earlier, and offers to take Pinkie to Sweet Apple Acres. Pinkie repeatedly refuses to go, leaving Rainbow Dash no choice but to forcefully drag her there. Upon arriving at the farm, Rainbow leads Pinkie to the barn, where a surprise party is being held with all their friends. Pinkie assumes this is a surprise farewell party to celebrate her being booted from the group, until everyone explains that it's her own surprise birthday party. Pinkie, realizing she'd forgotten it was her own birthday, returns to her old cheery self and decides to enjoy the party. Twilight writes to Princess Celestia from the party, stating the Aesop that one shouldn't expect the worst from their friends.

It is revealed the reason the other mane characters were trying to avoid Pinkie and denied Gummy's after-birthday was because they were planning a surprise party for Pinkie's own birthday, and she completely forgot it.

Example of:
Forgot Their Own Birthday

It is revealed the reason the other mane characters were trying to avoid Pinkie and denied Gummy's after-birthday was because they were planning a surprise party for Pinkie's own birthday, and she completely forgot it.