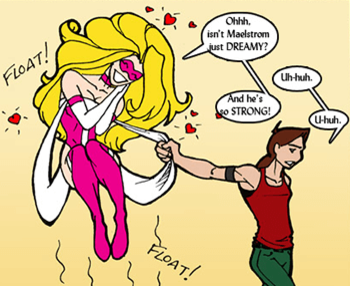 Love is a many-splendored thing. It can cause those who are in the throes of it to do amazing things. Go into war against a nigh-insurmountable foe, climb the tallest mountain you can find, put down the toilet seat after they're finished, lots of stuff. Many people like to say that true love gives them a feeling like they're walking on air. In some forms of fiction, this is taken literally.
Advertisement:

A man and a woman are shown in an embrace, they are both smiling, happy and content. As the camera backs away, we see that their feet are a few inches above the ground, but they are both so enraptured, they don't even notice their sudden lack of gravity. This is what is known as a Lovitation (a portmanteau of love and levitation). This is usually shown in fantasies, science fiction stories and occasionally romantic comedies to show that there is an overall magical quality to The Power of Love. No not that one. Or that one.