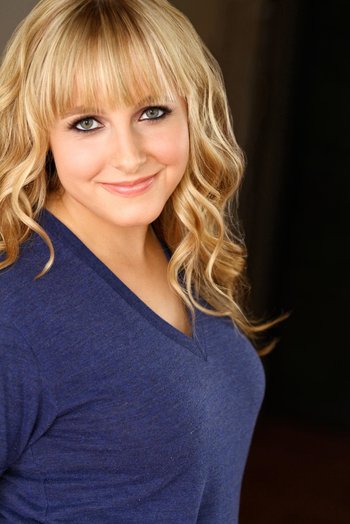 "Well I’ve been doing it for about twenty years, I did films when I was a little kid, when I was about six or seven, I was in films and I had this really high voice, I did a series called Dino Babies, that was my first one. And then after that I did Madeline, yeah so it just kind of happened and then never went away. Then everyone said your voice is going to change and you’ll be out... No, no, still on helium."
—Andrea Libman summing up her career.
Advertisement:

Help describe Andrea Libman, that is, um, if you don't mind...

Andrea Eva Libman (born July 19, 1984 in Toronto, Ontario) is a Canadian voice actress working with The Ocean Group, who has a knack for voicing cute girls. Andrea started off as a child actress in Vancouver based shows and movies, such as Highlander, Little Women, and a notable appearance in an episode of The X-Files, "Born Again"

, as a cute yet possessed killer little girl. She eventually focused on voice over roles, starting with Dino Babies and Madeline, mostly because she got braces for a while so live action people didn't want her but also because she's a tad camera shy.

Her notable Western roles include Emmy of Dragon Tales, young AndrAIa in ReBoot, Lemon Meringue in Strawberry Shortcake, Harmony Bear in Care Bears: Adventures in Care-A-Lot, Cathy in Monster Buster Club, and of course Pinkie Pie & Fluttershy in My Little Pony: Friendship Is Magic, characters that couldn't be any more different beyond the fact that they're cute and high-pitched. Andrea also voiced Zipzee and Sweetie Belle in the G3 era of My Little Pony, which in her own words was "just sweet, sweet, sweet." She was also the original voice of X-23 when the character debuted in X-Men: Evolution, so she's got some super hero cred under her belt, too. Other roles include Cylindria in Pac-Man and the Ghostly Adventures and the title character of the 2014 Maya the Bee remake. Pseudo-gamer cred and more cute!

Like other Ocean Group actors she's done her share of anime dubs, notably Chi Chi in Dragon Ball and Mileina Vashti in Mobile Suit Gundam 00, who is described elsewhere on This Very Wiki as "Pinkie Pie if she weren't hyper". Still cute.

Before the memetic popularity of ponies, her most famous role would probably be that of cute classic children's book character Madeline, whom she played in the 1990s series The New Adventures of Madeline (taking over the role from Tracey Lee-Smythe) and movie Lost in Paris. After the movie she was replaced by Chantal Strand, who would also go on to voice a pink pony (Diamond Tiara) in Friendship is Magic.

She's also an accomplished singer, and her vocals can be heard on the songs "When Sunny Gets Blue," "The Girl From Ipanema" and "I'll Be There" on the late 2014 multi-artist CD At Home (which also features fellow MLP VA Michelle Creber). Earlier on, Libman also sang on Creber's parody video "Tweet It" from late 2013 and duetted with famous Brony musician MandoPony on Jason Mraz's "Lucky" at a pony convention that same year.

Not to be confused with Andrew Libman, despite certain TV listings constantly crediting her as such for Friendship is Magic.