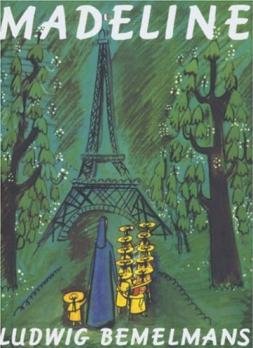 In an old house in Paris, that was covered with vines, lived twelve little girls in two straight lines. In two straight lines they broke their bread, and brushed their teeth, and went to bed. They smiled at the good, and frowned at the bad, and sometimes they were very sad. They left the house at half past nine, in two straight lines, in rain or shine. The smallest one- was Madeline.
Advertisement:

Madeline is a series of children's picture books first published in 1939 by Ludwig Bemelmans, about a little French boarding school student, her eleven friends, her teacher, Miss Clavel, Spanish prankster and friend Pepito (first appears in Madeline and the Bad Hat), and her dog, Genevieve (who first appears in Madeline's Rescue).

Some Madeline animated shorts were made in the 1950s; the first, Madeline, was nominated for an Academy Award. CINAR and DiC Entertainment produced several Madeline cartoons from The '80s up through the early 2000s. These ranged from TV specials adapted from the original books, to TV shows and direct-to-video movies with original stories.

Tristar released a live-action feature-length movie based on Madeline, Madeline and the Bad Hat, Madeline and the Gypsies and Madeline's Rescue in 1998. It followed the books, but also expanded the plotline, because... well, it's a picture book series. The expanded plot was for Madeline and her friends to stop Lord Cu-Cu Face (portrayed here as having the "real" name of Lord "Covington") from selling the boarding school. Madeline was also turned into an orphan in this version.