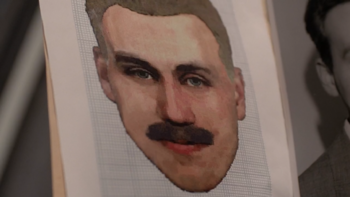 "What I saw was some traumatised little girl who for no apparent reason has some connection to Charlie Morris."
Written by Howard Gordon & Alex Gansa
Directed by Jerrold Freedman
Mulder: Psychokinesis is usually associated with an electrical charge.
Scully: Are you saying Michelle possesses the ability to psychically project her own will?
Mulder: How else could a 60-pound kid throw a 200-pound detective out the window?

In Buffalo, New York, police officer Rudy Barbala is thrown from a window after eight-year-old Michelle Bishop (Andrea Libman) is brought in. While initially appearing to be a suicide, enough doubt about the strange circumstances of his death exists that Mulder and Scully are brought in. There, they find a seemingly supernatural link between Michelle and an officer who had been slain the day she was conceived, along with a nest of corruption within the police department.