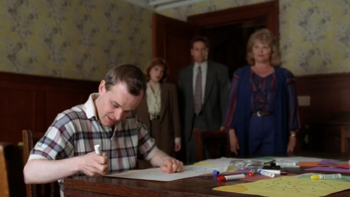 "Don't some autistic individuals display unusual abilities?"
Written by Chris Ruppenthal
Directed by David Nutter
"Now, you see the way you work that toy is like what's happening to you. You're the spaceship, Roland, and your dreams are the controls."
— Fox Mulder
Advertisement:

A scientist has been murdered at the Mahan Propulsion Laboratory in Washington state, and the lone suspect is the janitor Roland Fuller (Željko Ivanek). Problem: Roland has an IQ of about 70, and couldn't have performed the deed. Something else is going on, and Mulder and Scully are there to find out. Could it have something to do with Arthur Grable, a scientist at the laboratory who died in a car crash a few months earlier? After all, his head was cryogenically preserved, and he is Roland's twin brother…

Mrs. Stodie: How could this happen? Roland never exhibited any violent tendencies.
Mulder: It's my belief that he wasn't acting under his own volition.