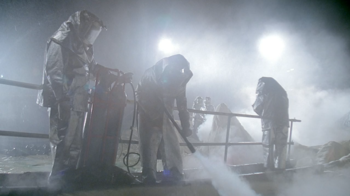 Mulder and Scully investigate a mysterious crash site in Wisconsin, where an alien creature attacks people with lethal doses of radiation. Their investigation is complicated by a military retrieval team assigned to destroy the creature at all costs, and a UFO abductee, Max Fenig (Scott Bellis), who has a connection with the alien. Back in Washington, Mulder's superiors consider shutting down the X-Files.