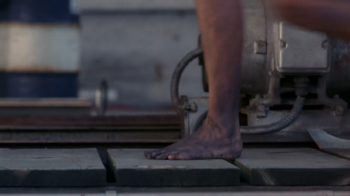 "I saw it, it's exactly the way the ranger described it, the way it moved, the way it sniffed the air."
Written by Chris Carter
Directed by Joe Napolitano
Mulder: Ever hear of something called the Jersey Devil?
Scully: Yeah, it's a beast that's supposed to come out of the woods and attack cars, right. Kind of like an East Coast Bigfoot.
Advertisement:

Mulder and Scully head out to Atlantic City to investigate some murders that look (at least to Mulder) suspiciously like reports in the X Files of the Jersey Devil (Claire Stansfield) in the 1940s. Also: Scully goes on a date with a divorced dad who seems unable to go two sentences without bringing up his kids.

"Eight million years out of Africa."