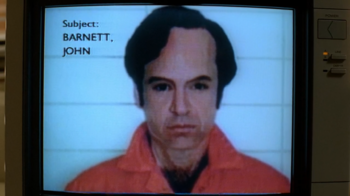 "The man who owns the fountain of youth controls the world."
Written by Scott Kaufer & Chris Carter
Directed by Michael Lange
Scully: You did the right thing, Mulder.
Mulder: Did I? Steve Wallenberg had a wife and two kids. One of his boys is an all-star on his football team now. I pull that trigger two seconds earlier and Wallenberg would be here to see his kid play. Instead, I got some dead man robbing jewellery stores and sending me haikus.
Advertisement:

A violent bank robbery is committed by a perpetrator whose M.O matches that of John Barnett, a sociopathic criminal who Mulder helped capture in his early years at the Bureau. When the criminal starts leaving taunting notes and messages to Mulder about their shared past and threatening his friends, Mulder becomes convinced that Barnett has returned to get his revenge. One problem — Barnett apparently died four years ago...

Scully: Mulder, I know what you did wasn't by the book.
Mulder: Tells you a lot about the book, doesn't it?