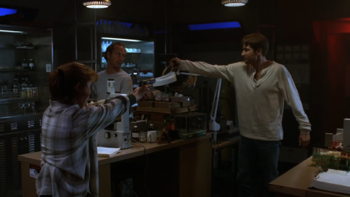 "I'M NOT TURNING MY BACK ON ANYONE! AS FAR AS I'M CONCERNED, YOU'RE ALL INFECTED!"
Written by Glen Morgan & James Wong
Directed by David Nutter
"Hey, look, there's only one way to proceed. A good doctor eliminates every possibility. We must determine if any of us is infected."
— Dana Scully
Advertisement:

The X-Files meets The Thing (1982), without all the cool stop-motion effects (but still maintaining a lot of the suspense). Geologists studying Arctic rocks lapse into insanity and kill each other off one by one. Mulder and Scully, along with two scientists (Felicity Huffman and Steve Hytner), a doctor (Xander Berkeley) and a pilot (Jeff Kober), fly over to the base to see what's up. Unsurprisingly, the craziness starts affecting them too.