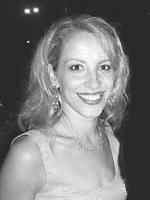 Lalainia Lindbjerg (born September 3, 1974 in Coquitlam, British Columbia) is a Canadian voice actress who has worked for The Ocean Group in Vancouver, British Columbia, Canada. She has played several roles in anime, known for her role as Bulma in Dragon Ball. Before she was credited as the English voice of Stella Loussier in Mobile Suit Gundam SEED Destiny, Kelly Sheridan had mistakenly received the credit for Stella's English voice according to most anime web sites before SEED Destiny was released in North America.