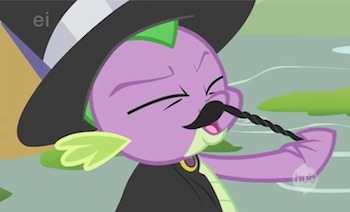 Spike: Uhh... hi there. I'm Spike. I'm sure Twilight has told you all about me.
Owlowiscious: Who?
Written by Cindy Morrow
Advertisement:

Spike and Twilight are getting ready for the meteor shower which happens every 100 years, and when Twilight asks Spike for an astronomy book, Spike goes to get it, only to accidentally burn the pages away due to him sneezing from the dust. Rather than tell Twilight the truth, he tells Twilight someone else must have checked out the book. They arrive at the spot where they meet with their friends, including the Cutie Mark Crusaders, and Spike enjoys being admired as "Twilight's #1 assistant". He eventually falls asleep during the party in the punch bowl, leading Pinkie Pie to comment that "the punch has been... Spiked!" Twilight eventually takes him home. After getting Spike to bed, Twilight begins to write about meteors and a gust of wind blows away the paper. An owl grabs it for her, but when it's about to fly away, Twilight asks him to accompany her during the night.

When Spike wakes up the next morning, he notices the owl, now named Owlowiscious, now is helping him with the daily chores as the junior assistant. While Twilight leaves, she asks him to introduce himself to the owl. However, Spike gets suspicious and starts to get jealous at the possibility of being replaced, as Twilight shows off Owlowiscious to her friends and basically having most of his chores done by the owl, leaving Spike with little to do. Eventually, Twilight finds the book Spike burned by accident, and is angry and disappointed in him for lying to her. In response, Spike steals Opalescence's toy mouse, then tries to use ketchup and feathers to frame Owlowiscious as a mouse-killer. Twilight catches him in the act, and expresses her deepening disappointment by saying "This is not the Spike I know and love!". Spike is distraught at the notion that Twilight doesn't love him anymore.

Spike runs away to the Everfree Forest and takes refuge in a cave when it rains. He sees a lot of gemstones, only to later find the cave is occupied by a full grown dragon. Spike tries to have a friendly chat, but the dragon is more interested in frying him to a crisp. However, Owlowiscious shows up and distracts the dragon, and Spike is overjoyed when Twilight comes to rescue him. They escape with Owlowiscious taking point so they can see their way through the dark forest.

After everyone is safe, they discuss their issues. Twilight was worried about Spike running away; she tells him he'll always be her #1 assistant and friend, and that Owlowiscious is to help her at nighttime (so Spike can sleep)...not to be Spike's replacement. They both apologize, Spike for being jealous, and Twilight for not being more sensitive. Spike then apologizes to Owlowiscious for his jealousy, and learn that the two followed him to the cave because Owlowiscious noticed his ketchup-smeared footprints.

Spike decides to write the weekly letter to Princess Celestia, learning that telling lies and being jealous gets you nowhere, and there's a lot of love for everyone to go around. During the writing, he falls asleep.

Example of:
Owls Ask "Who?"