Recap / My Little Pony: Friendship Is Magic S2 E18 "A Friend in Deed" 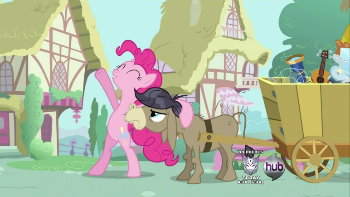 It's the start of a typical day for Pinkie Pie: make the Cake twins laugh, say hi to everyone she knows (which is just about every pony, cow, and even donkey in Ponyville), and burst into an incredibly catchy musical number about how she loves to make her friends smile. But what's this? There's a new face in Ponyville, and it's not smiling!

That face belongs to an old donkey hauling a cartload of junk through the center of town. Pinkie Pie tries to introduce herself, but all she learns is that the donkey is named Cranky Doodle Donkey, he's very sensitive about his middle name, and he's not interested in being Pinkie Pie's friend. Confused, she goes over her thought process and wonders what would possess anyone to not be friends with her. She quickly becomes determined to win Cranky over.

Pinkie starts following Cranky through town, offering to show him around, asking about the stuff in his cart (of which he's very protective), and even rolling out an actual welcome wagon: the whole song and dance (literally, in the case of the welcome wagon). Unfortunately, this just annoys Cranky even more, especially when she messes up his toupee in the process and causes him quite a bit of embarrassment while trying to find a new one. After a trip to the spa and the gift of a replacement toupee, Cranky reluctantly thanks Pinkie Pie, but still refuses to crack a smile.

Pinkie ends up following Cranky to his house and offering to help unpack, where Cranky mentions that he's been looking for a "special friend". While unpacking, Pinkie finds an old scrapbook with one page in particular that intrigues her... unfortunately, Pinkie accidentally sets fire to the scrapbook, and makes an even bigger mess of it trying to put out the fire. Furious, Cranky throws her out of the house and vows that he will never be her friend.

At the library, Pinkie Pie seeks sympathy from Twilight Sparkle and Rainbow Dash, who tell her that she should just let things go and give Cranky some space. Pinkie agrees that she should leave Cranky alone... once she gets him to accept her apology, that is. She proceeds to hound the old jack-ass across Ponyville and its outskirts, begging forgiveness, but he ends up barricading himself in his house and stubbornly refusing, protesting that Pinkie ruined the only thing he had to remember "her" by. Pinkie is suddenly struck by inspiration, and finally leaves, only to return with someone special in tow: Matilda the donkey, who had a scrapbook to match Cranky's, with matching contents... including a ticket stub and a menu from the Grand Galloping Gala!

Cranky and Matilda met at the Gala years ago, but after Matilda left the next morning, Cranky missed the note she'd left him and spent his whole life trying to find her. Finally reunited with his long-lost love just when he was about to give up, Cranky manages a smile, and accepts both Pinkie Pie's apology and her friendship. Pinkie is ecstatic that she finally made Cranky happy... but quickly realizes that he'd be even happier if she gave him and Matilda some time alone.

The episode ends with Pinkie mentally preparing a letter to Princess Celestia, courtesy of voice over. In it she mentions that while some folks are as social and outgoing as her, others prefer to have some space to themselves now and then. Either way, she can be friends and make them smile.