Recap / My Little Pony: Friendship Is Magic S1 E22 "A Bird in the Hoof" 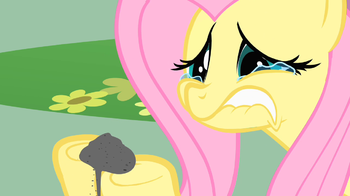 A bird in the hoof is worth a thousand meme images.
Twilight: You have no idea what the Princess is gonna do when she finds out you're the one who took her pet, do you?
Fluttershy: Do you?
Written by Charlotte Fullerton
Advertisement:

Princess Celestia is at Sugarcube Corner for brunch, and Twilight Sparkle and her friends are all supposed to be there. Fluttershy, however, is running late due to her nursing yet another woodland creature back to health. Twilight is over-anxious today, seeing as this is the first chance the Princess will have to really get to know her friends, and the rest of the mane cast aren't faring much better: Rainbow Dash tries to get a reaction out of the stoic, intimidating royal guards, Rarity is freaking out about anything potentially staining her dress, Applejack has trouble remembering her table manners, and Pinkie Pie's being... well... Pinkie Pie.

Despite all this, Celestia seems to be taking the whole event in stride, even finding a chance to pull a lighthearted prank. Also, Celestia didn't arrive alone today, as she brought her pet bird, Philomena, along. Fluttershy notices that the bird seems to be really, really sick. When Celestia has to leave early due to the mayor of Ponyville wanting to see her, Fluttershy, unseen by anyone, decides to take the creature home in order to take care of it.

As it turns out, taking care of the bird is easier said than done. Philomena doesn't go along with Fluttershy's usual regimen of medicine, hot soup, and bed rest, and all her alternative treatments don't seem to make any difference, either. With such a stubborn and rapidly-declining patient, everything looks hopeless for Fluttershy. Twilight stops by Fluttershy's cottage and immediately panics when she sees Philomena, convincing Fluttershy that she could be severely punished for stealing the Princess' pet. They're about to return the bird before anyone notices she's missing, but the royal guards show up at the door, informing the ponies that the royal pet is missing and that they're on the lookout for her.

After the guards leave, Twilight tells Fluttershy they can't return Philomena now, and she tries to help her get Philomena better, this time with a little "tough love"...which means shoving medicine down the patient's throat, putting a cone on her so she doesn't pick at her feathers, and putting a blanket over her birdcage to make her go to sleep. During an attempt to force-feed Philomena a hot bowl of soup, however, the bird escapes, leaving Twilight and Fluttershy in Benny Hill-like hot pursuit. The chase goes all over town, until finally, the two ponies catch up with Philomena, who looks about ready to keel over. And she does, in fact, falling to the ground and… bursting into flames.

With nothing but a pile of ashes where Philomena used to be, and the Princess approaching the distraught ponies, Twilight prepares to take the blame. However, Fluttershy intervenes, and confesses taking Philomena in the hopes of nursing her back to health. Princess Celestia briefly mourns her pet, before suddenly perking up and telling Philomena to stop scaring everypony.

Immediately, a magnificent, fire-colored bird rises from the ashes and flies around the ponies. Turns out Philomena's a phoenix, and her sickness and bursting into flames are just a natural part of her life cycle. However, that doesn't really excuse her Jerkass behavior towards Fluttershy, so the Princess makes her apologize. Celestia also forgives Fluttershy for taking Philomena, but points out she could have avoided all of this by simply asking to take care of her. With the lesson learned, the episode ends on a happy note... but not before Rainbow Dash takes advantage of Philomena's mischievous nature by convincing her to tickle the royal guards.