Watch Where You're Going! 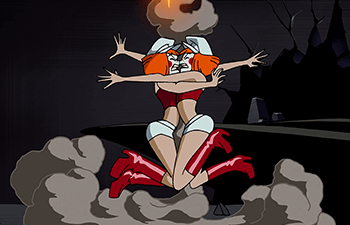 A character (or group of characters) are either running from something very bad (like a large boulder or a very angry and relentless enemy), or chasing after someone. They are totally focused on this act, so much that they don't notice someone coming from the other direction doing the exact same thing, and as a result they run right into each other, usually being knocked unconscious in the process and often resulting in seeing stars or birds or planets in their field of vision. In some cases, they'll be knocked off their feet, hover in the air for a few seconds, and then fall to the ground. In some cases, they might see the other coming at the last moment, but momentum makes it impossible to stop in time, so there's nothing they can do but watch the other barrel towards him/her. At times, the third party is able to make them Put Their Heads Together without ever laying a hand on either of them.

This is a humor trope from old Looney Tunes cartoons, with the being-chased version often being employed by the hero to get enemies to defeat themselves.

See also Crash-Into Hello, for a version with romantic undertones (and Suggestive Collision for the more lurid version), and Watch Out for That Tree! for a comedic variation with just one person and a stationary object. Punched Across the Room might be a more violent variation.

The Return of Harmony - part 1

The Return of Harmony - part 1