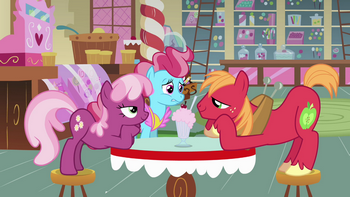 They look adorable together, right? But then they start talking...
Sweetie Belle: We did it, girls! We found the one!
Who will send our teacher's heart a-flutter!
Apple Bloom: Wait a minute, let me get this straight.
Are you talking about my brother?
Written by Meghan McCarthy
Advertisement:

Hearts and Hooves Day has come to Ponyville, a day for ponies to let their loved ones (be they friends, family, or significant others) know how much they mean to each other. The Cutie Mark Crusaders offer their teacher Cheerilee a huge, lavishly decorated paper heart the size of a rug, and in return discover that Cheerilee doesn't have a "very special somepony" to share the day with. According to Apple Bloom, a mare as wonderful as Miss Cheerilee clearly deserves to have somepony special in her life, and Sweetie Belle gets the idea for the Crusaders to go find him. One musical montage later, they've narrowed down the list of eligible bachelors to one: Apple Bloom's older brother, Big Macintosh.

The Crusaders try to trick the pair into a blind-date picnic at the town gazebo, but the situation that results is more awkward than romantic, and Macintosh and Cheerilee part ways. Back in town, the disappointed Crusaders run into Twilight Sparkle, who just happens to have a book on the history of Hearts and Hooves Day... which includes a recipe for a love potion!

The Crusaders borrow the book, whip up the potion, and serve it to Big Macintosh and Cheerilee, under the pretext of having the pair sample some punch they are intending to sell. The two older ponies drink down the potion, their eyes meet, and they fall head over hooves for each other! Unfortunately, the potion seems to work a little too well, as Cheerilee and Macintosh don't seem to be interested in doing anything but gazing into each other's eyes and calling each other sickeningly sweet pet names.

Checking the book once again, the Crusaders discover that the potion they whipped up was actually a love poison, one that led to the fall of an ancient kingdom when a prince and princess under its effect were too lovestruck to attend to their royal duties. Fretful of the chaos that will surely result from Cheerilee and Big Macintosh neglecting their duties, Apple Bloom leads her friends to find the lovebirds and cure them. Fortunately, the book also mentions that the spell can be broken if the victims can be kept from looking into each other's eyes for an hour.

Alas, Cheerilee and Big Macintosh are so utterly transfixed on each other that they resist the girls' attempts to break their gaze... until Sweetie Belle suggests the two get married! As part of the wedding preparations, Sweetie Belle manages to barricade Cheerilee in a changing room at Carousel Boutique while picking out a wedding dress, while Apple Bloom and Scootaloo try to keep Big Macintosh busy shopping for an engagement present. Unfortunately, Big Macintosh manages to make his purchase and slip away from the fillies; Apple Bloom has a devil of a time trying to stop her super-strong brother, as not even tying him to a house does more than slow him down. Scootaloo and Sweetie Belle manage to catch him in a pitfall just outside the boutique, but with seconds left on the clock, Cheerilee barges out of the changing room to be with her "schmoopie doo", and the two end up at the bottom of the pit together...

Thankfully, the poison has just worn off, leaving the two very confused as to why they're on a mattress in a deep hole with Cheerilee wearing a bridal veil. The Cutie Mark Crusaders confess to spiking their drinks with the love poison, and admit they've learned not to mess with other ponies' relationships. Cheerilee is ready to forgive them... after they complete Big Macintosh's chores, that is.

Later on, the Crusaders are just about finished with the chores when Cheerilee and Big Macintosh announce that with the free time Mac's earned, the two of them have decided to go on a picnic together. And just to mess with the Crusaders' (and the audience's) heads a little, they throw in a little lovey-dovey talk before walking off into the setting sun together, while the Crusaders are horrified thinking they’re still under the love poison.

Cheerilee: Well, this has been... strange!
Big Macintosh: Eeyup.