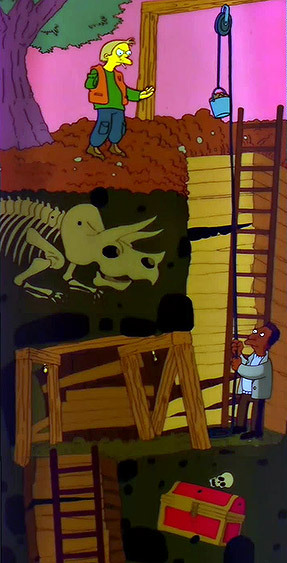 "You would think with this much digging we'd eventually find something interesting. But no, nothing down here but dirt."
Advertisement:

We all know that nature abhors a vacuum, and artists abhor large empty spaces on their canvas. That's why in fiction, the underground is filled with crazy stuff. We often see a lateral cross-section of a terrain (mostly in drawn works) which has all kind of fossils (either a Stock Femur Bone or fully articulated skeletons), aliens, treasures or crazy objects scattered in for the sake of fun. Sometimes, this trope will be applied to the sections inbetween floors or walls of a building instead. Somewhat related to Funny Background Event. Compare with Funny X-Ray.